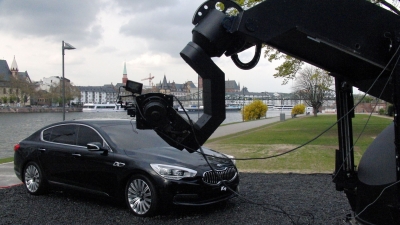 Our motion control adventure started in 2006 when we met the Milo. Since then, we've worked with an array of motion control systems from Flair-based ones (Milo, Bolt, Titan, Talos, Modula, Panther, Animoko), various rigs running on Kuper and even an Atari (please don't ask us to operate that one again!). 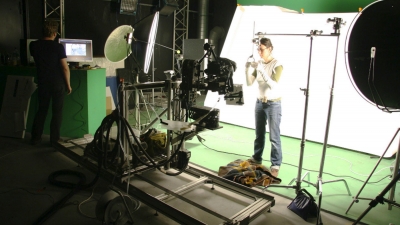 We regularly operate motion control systems in the international market for commercials and feature films such as Narnia III, John Carter of Mars, with shooting experience in more than 25 countries.

Our crew has been working together for long enough that the set up goes smoothly and what makes us unique is the added experience we have in visual effects and 3d that enables us to get involved early on in the planning. We can pre-vis a shot that delivers meaningful information for various departments like set building, lighting, camera and make sure that it works on the shoot. 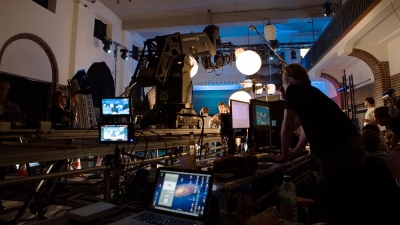 The industry-standard motion control system MILO and the high-speed system BOLT are stationed at our Hamburg studio as well as other equipment with which we can build various custom rigs to fit your needs. Moreover, we have a partnership with Motion Control Europe (NL) and close working relationship with Mark Roberts Motion Control (UK) to bring you any other rigs that your project might require. 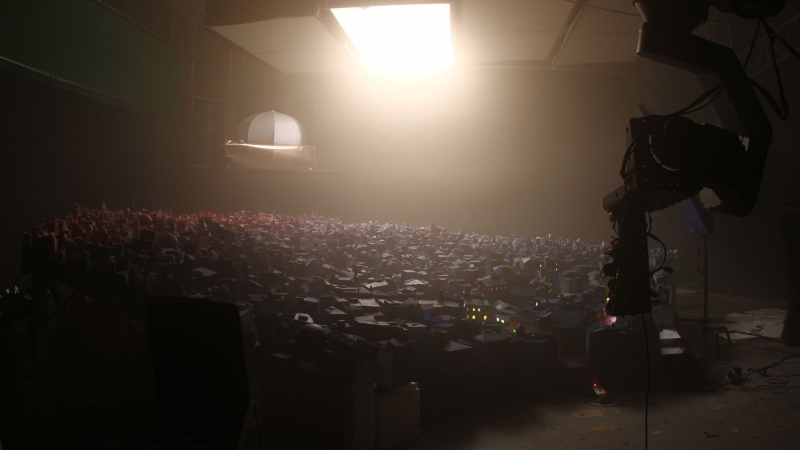 Here is some ways in which motion control could make your shoot possible - and, believe it or not, fun:

Even if you are not planning any effects, motion control is great for just doing camera moves. You can quickly and interactively program moves on set and refine the framing and timing until you´re happy. It will always move exactly the same, including the focus. With the Milo centered in the studio you have a great reach and can run straight lines and curved moves in any direction without resetting tracks. Using target tracking you can easily setup moves that keep an object in center like circular moves around packages. Since the camera movement will always be exactly what you have set up, you can instead focus on the timing and acting of the cast, handmodels or special effects. You can even setup the camera moves the day before the real shoot with stand ins or prelight and just load them in during the shooting day for efficiency.

Probably the simplest and most known effect shot using motion control, since the camera move is repeated accurately you can shoot multiple passes and combine them in post production - shoot clean plates, have the same actor appear several times in the same shot, shoot large crowds in different sections, combine different lighting or different speeds. Motion control enables you to make all the nice and simple tricks that are otherwise only possible with a locked off camera.

Once you have a shot you can offset the whole move in space, change it´s size or even rotate it. By being able to scale the move it is possible to e.g. combine actors with miniature sets while keeping the ground contact stable and the camera movement visually consistent. By rotating a move you can shoot actors to stand on the ceiling or walls while actually only the camera move is rotated. You can shoot miniature set extensions for normal sized camera moves or just combine differently sized sets and special effects.

Operating camera moves manually in miniature sets and macro shots is tricky and tedious, often special lenses like snorkels are needed which are practically impossible to move manually due to the large nodal offset. No matter which size the models are, you can make complex camera moves, have the focus always on the spot, shoot them in layers or combine them with differently sized layers using scaling.

A very long programmed move done on set or in cgi can be broken down to different segments which are then shot separately. By using this you can create endless cameramoves even in smaller locations or just get the timing right separately without doing too many takes.

You can run every programmed move also frame by frame, allowing you to do in camera animation with a smooth camera move when played back. From just animating objects in live action sets to doing full stop motion films with puppets. With go motion it is possible to even replicate the correct motion blur of the camera move while shooting every frame separate. When shooting single frame you can use a DSLR and trigger it with the motion control system. Using DSLRs is an option even for product shots when you don´t have actors or other moving things in the frame. By using an additional axis for the interocular, you can even shoot s3d with just one camera.

When shooting food or natural phenomena you want to have everything which is possible to be controlled to be exactly repeatable each take. You can use little electronical, mechanical, pneumatical or hydraulical devices triggered by the motion control at exact frames in the move or use additional motors for this. The time you save on just trying to get the timing right you can use to make your shots look even better. We have a modular sfx rigging system to quickly setup custom devices, can interface to devices of the sfx department or can design and build something for your need, just ask.

Do you need to shoot something a bit less reliable in timing like e.g. animals or just want a handheld feel to the move while still having all the benefits of motion control? You can record axes in realtime by using an encoded fluid head or handwheels and play back that exact move later on for additional passes. You can also program a move and then just add some handheld movement to the pan/tilt or other axes.

Camera moves programmed on set can be exported for use in cgi software. You can also create moves in cgi and import them to run on the motion control system. By doing this you can exactly setup and previs a shot in cgi and then run it on the set. You can shoot live action layers for cgi shots or even track manual camera moves and then reshoot them on the motion control. By using motion control systems in combination with model movers you can replicate even the most complex 3d object and camera movements. There is a lot more effects you can do using cgi and motion control in combination. While this all might sound too good to be true keep this in mind:

While skipping the task of 3d tracking using the cgi export sounds nice, we mostly recommend shooting additional tracking passes (put as many markers or stands in the picture as you like) because only the camera curve in 3d space does not help you too much when exact contact of 3d objects to real surfaces is needed and because correctly matching the lenses in 3d is much easier and very fast using tracking software. In some cases like cgi backdrops this might be sufficient though.

While for very complicated camera moves it might make sense to prepare them in cgi, this is certainly not the case for every move. Setting up a camera move on set is an interactive process with the creative positions while importing and correctly aligning, adjusting and often fixing a cgi import can be a tedious and very technical task that can take considerable time, which you don´t want to spend with the whole crew waiting. Cgi imported moves should be tested beforehand and ideally setup on prep days. Talk to us in advance what might make sense for your shoot.

While the Milo is designed to be a portable system with a large reach running at live action speeds while being incredibly rigid, you might just need a motion control head, a small and very fast track, a system which you can carry to a 3rd floor in a building, or just a cheaper rig for a longer stop motion shoot where you don´t need the live feedback but essentially just more time at a lower cost. There are different rigs available by the companies we work with and know and we have some equipment of our own, we´re open for a conversation about your shots and can recommend something that fits your specific needs.